The debugger consists of two parts:


The debugger connects to the debuggee through special files that can be arranged in any convenient place. Therefore, the debugged program may physically reside on a different computer and even be built on another OS. Thus, we can, using the Windows version hwgdebug.exe at its computer, to debug a program running on some other computer in the network under Linux or, for example, OS2.

This approach allows, in particular, to implement debugging applications in IDE, I donate this idea to IDE developers :).

Sources of the debugger, as already mentioned, are in the HwGUI sources distribution, binaries ( library and debugger), you will find in the HwGUI binary distributions - look at the appropriate page. In addition, you can download the debugger binaries in the form of a separate package hwgdebug-2.04.zip, it includes libraries for Borland C and Mingw and executable - as you know, has no meaning, what is the compiler it is built with, and even what language was used. 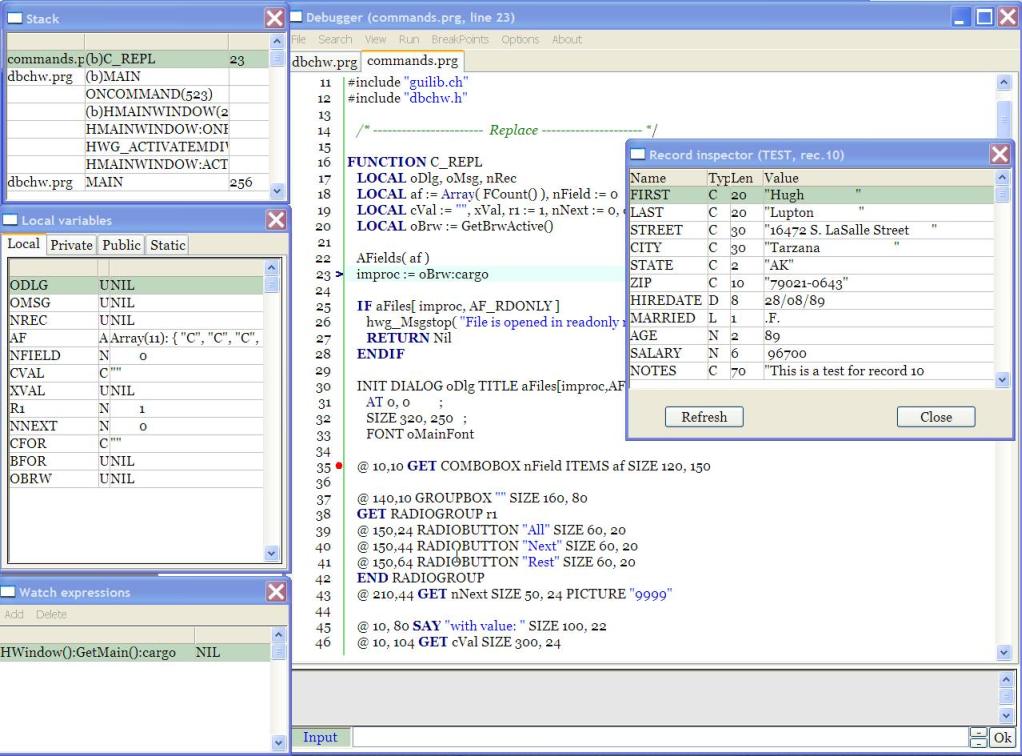 2. How to build the application and run it with debugger

An application is built in the same way as before, as with a standard debugger. We add the -b option to the command line of the Harbour compiler and add the debugger library to the list of libraries for the linker, only now it's not hbdebug.lib, but hwgdebug.lib.

There are several ways to run the application on debugging:

In the working directory of the program being debugged, you can place a file hwgdebug.info and to provide some options to start the debugger, namely:

Dir is the name of the directory for storing temporary files, which connects program to a debugger, this directory must have read/write access for program and debugger, it can be placed in any convenient place in the network. Specify this setting is necessary when you start the debugger with the variant 4 ( see above ).

Debugger - path to the debugger and his name can be specified if it location is not specified in the PATH, or if you want to use another instance of the debugger.

RunAtStart - if this option is omitted or set to Off, debugging starts with the first executable line of the program. If it is set to On, it starts as a standard debugger - in-place program, where pre-set Altd(2); Altd().

If the debugger and your program will run normally, they are connected, and the program stopped ( on the first row or after the Altd() ), in the header of the debugger window appears the name of the corresponding prg module and line number where was stopped, in the main window of the debugger should appear the text of the prg. If the header prg name and line number are in a header, but the text window is empty, this means that the prg isn't found ( it is located in a different directory ) and you need to specify the path to it using the menu File/Set path.

The main functions of the debugger are the same as in the standard ( may, their a little less at the moment ) and they work in a similar way:

Go, Step, Trace, To cursor, Next Routine, Animate, adding and removing of breakpoints ( to do this, you can double-click on the relevant line ), viewing Workareas - for them, there are the same shortcuts.

View variables ( local, private, public and static ), the adding of the so-called Watch - expressions, which values are calculated at each iteration, view the call stack procedures ( double-clicking on any of them, we switch window with the text of the program on this procedure ).

Record Inspector - view of the current record of the opened database, to show it press Inspect button in the Workareas dialog window, or input the command :record ( see below ).

Object inspector - view of the variables and methods of a chosen object, to open it doubleclick ( or press Enter ) on appropriate line in a Variables dialog window, or input the command :inspect ( see below ).

Array inspector - view of the variables and methods of a chosen array, to open it doubleclick ( or press Enter ) on appropriate line in a Variables dialog window, or input the command :inspect ( see below ).

Evaluation of expressions during debug - enter the expression in the input window at the bottom of the main window of the debugger and click OK or press ENTER - the result should appear in the window a little bit higher. By using the buttons to the left of the OK or press Up, Down, you can move through the list of previously typed expressions ( the result of the corresponding expression for the moment when it run, will become the current row in the window above. You may move through the results of expressions, if you double click on any line in the input window appears appropriate for this outcome expression.

In this window we can input special commands, they must begin with a colon. By now, two commands are implemented:

The :record command opens the Record Inspector - the dialog box with a list of fields of a current record of a database, determined with an alias <cAlias>. If the alias isn't designated, the current workarea is used.

The :inspect command opens the Object Inspector or Array Inspector, depending on the type of a <cVarName> variable, - the dialog box with a list of variables and methods of an object <cVarName>, or, respectively, of the array items.

It is possible to input only first letters of a command, even an one letter. So, to view a current record of a current workarea, it's enough to input :r.

Font (set via the menu Options/Font) and the path to the sources can be saved in the configuration file, using the Options/Save settings. This configuration file hwgdebug.xml is in the same directory as the executable hwgdebug.exe. In the same file, you can save a breakpoints (Options/Save breakpoints), so that the next time you debug the program does not install them one by one, but restore all at once (Options/Load breakpoints). Breakpoints for each program being debugged stored separately, you can change them if necessary before starting the debugger, with any plain text editor.

In the same directory with the hwgdebug.exe should be yet another xml file - hilight.xml - configuration file for syntax highlighting.

Email address:
(not be shown publicly)
Input text from an image: