Five Stones is a computer program for playing go-moku and renju. 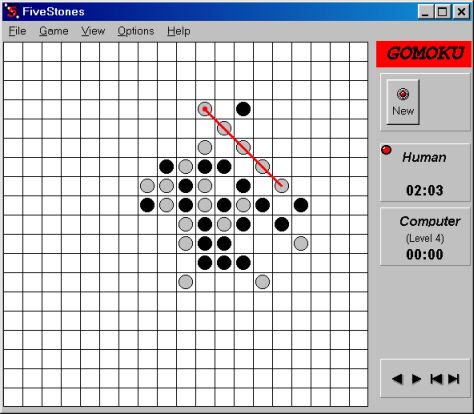 Go-moku is an ancient game, its roots lie in China and Japan. By now, it is also popular in several countries of Europe and the former Soviet Union. Part of go-moku's popularity must be ascribed to the fact that it can be played with pencil and paper, allowing it to be played everywhere and by everyone.

Five Stones is a freeware program and is provided at no charge to the user.

Below are links to download the program, there are two versions - for the Windows and for the Linux. Linux version was written on Harbour, HwGUI and C, it is built on Fedora 15 and was tested on AspLinux 14, Fedora 16, Debian 6.

Email address:
(not be shown publicly)
Input text from an image: